This past Tuesday we had a sculpt-off for our class. We had just learned Zbrush the week prior and this was an opportunity to put our skills to the test and make something with a little more freedom than recent projects had allowed. The only constraints for the sculpt-off were that we had to start from a sphere and we had 1.5 hours to complete it. The theme was Halloween, which is a bit broad, but that created for a nice variety of resulting sculpts. We were given a weeks notice on this sculpt-off and told that we could practice and prepare any sort of alphas or brushes we might want for contest, so I made a concept board on pinterest and found some brushes and alphas that I might want. I did two practice sculpts during that week and I did some silhouette tests and concepting to make sure I was as prepared as possible for the sculpt-off. Before learning it at FIEA this past week, I had never sculpted in Zbrush before, so I wanted to make sure I was comfortable. I had worked in Mudbox, which helped for general skills, but Zbrush's interface is still a little foreign until I have the time and knowledge to make it my own. Overall, I'm really pleased with how my sculpt came out. I decided on an evil looking scarecrow, which after the sculpt-off I named The Harvester.

The following day a poll was opened up for the rest of FIEA to vote on which sculpt they liked the best. They got to rank their top 6 choices. I was excited to find out the following class after the day of voting that I had won the sculpt-off. There was a pretty crazy 5 way tie for second place as well. I attribute my sculpt turning out so well to all the prep work I put into the design and practice before hand. There were some really top notch sculpts (as you can tell from the 5 way tie) and I know they would have beat me had I not practiced my techniques. 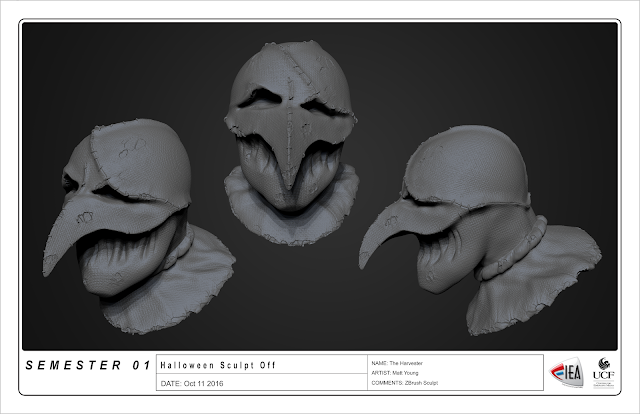