3D Class Week 06 UV and Digital Sculpting for a Prop

This week was exciting for me because I finally got my hands on Zbrush to do some sculpting. I've been making due with mudbox through my undergrad, but this week had been something I was waiting for for a while. I played around in zbrush for a couple hours getting a feel for it before starting this assignment. In total, it took me 7.3 hours to do this project, but that was in part because I did the sculpt twice. The first time came out well, but I wasn't satisfied with it, as it looked too similar to the example image we were given. I wanted to push the project a little bit further and sculpt something that looked more unique than what I had originally produced, so I started over on the sculpt. The second time around went a bit faster than the fist on the metal parts. The wood bit took some experimentation but I'm pleased with the final result. Excluding the original sculpt, the assignment took around 4 hours (Not that it really matters). Over the entire sculpting process, I ran into a lot of lag with Zbrush, which was annoying. I never went over 11 million poly's, which I didn't think would be an issue, but apparently that's where this laptops limits reside. 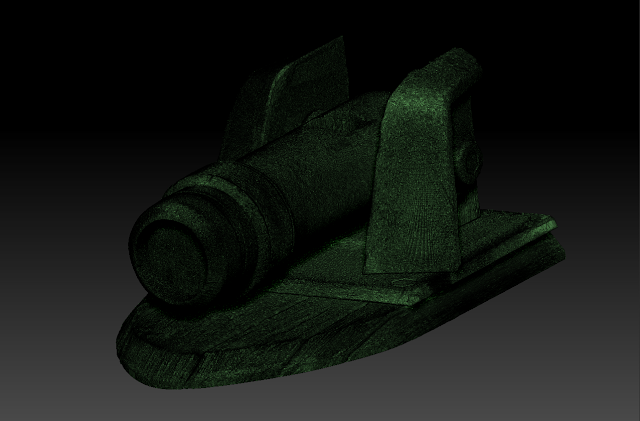